WWE Wrestlemania 35 takes place this Sunday, April 7 in New Jersey. Wrestlemania 35 is the culmination of Wrestlemania season, which began in January at the Royal Rumble, and continued through Elimination Chamber and Fastlane in February and March, respectively. It’s the “season finale” for all of WWE’s storylines. The biggest match on the card will be Ronda Rousey vs. Charlotte Flair vs. Becky Lynch for the Raw Women’s Championship. This is the first time ever that women will main event Wrestlemania. We’ll also see WWE Champion Daniel Bryan defend his title against fan favorite Kofi Kingston. Check out the specific start times as well as the current match card below.

WWE Wrestlemania 35 takes place in New Jersey this Sunday, April 7. The main card starts at 4 p.m. PT. If you’re a WWE Network subscriber — at $9.99 per month, but free for one month for new subscribers — you can watch it live for free. Otherwise you’ll need to contact your local cable provider and pay a separate fee to watch. The Kickoff Show will likely start at 2 p.m. PT on WWE’s YouTube channel and the WWE Network. 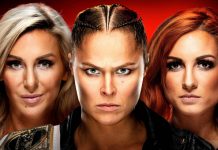