Capsule Gill Release Date 2023 – India’s upcoming comedy-drama Capsule Gill is in Hindi. Akshay Kumar, Parineeti Chopra, Rajesh Sharma, Gaurav Prateek, and Khushboo Atre play the main characters in the movie. The film was produced by Jackky Bhagnani and Vashu Bhagnani and was directed by Tinu Suresh Desai. The movie is scheduled to open in theaters in November 2023.

The first look for Akshay Kumar’s upcoming Capsule Gill has been leaked online. Fans have been eagerly awaiting the movie’s posters and trailers since the release of the picture.

The actor is seen in this leaked picture sporting a striped shirt and a maroon turban. Additionally, a full-grown beard and glasses are visible on him. Akshay can be seen grimacing while standing in a mustard field, which is said to be the Yorkshire field in the UK. He is looking far beyond. 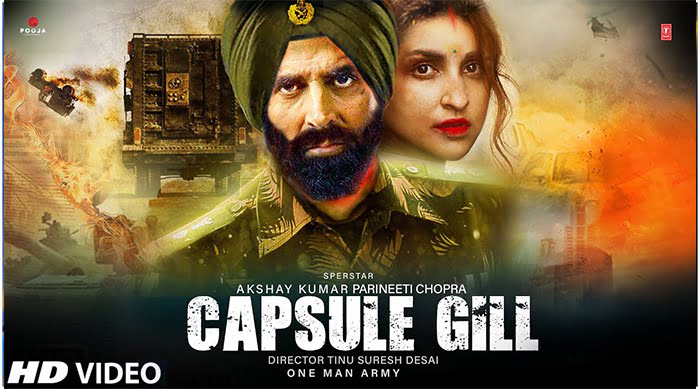 Tinu Suresh Desai is in charge of the film’s direction, and Vashu Bhagnani’s and Jackky Bhagnani’s production house provide assistance. The project is currently being shot in the United Kingdom by Akshay. “Over 100 acres (of the venue) have been reserved for shooting,” according to Variety, and the film “could be the largest Indian production of its scale to take place in the UK.” The movie is said to be called Capsule Gill, but Pooja Entertainment hasn’t said what it will be called officially. It should be finished by the end of August. Parineeti Chopra also plays Akshay’s wife in Capsule Gill. Kumud Mishra, Pawan Malhotra, Dibyendu Bhattacharya, and Ravi Kishan round out the remaining cast members. Virendra Saxena, Varun Badola, Rajesh Sharma, and Ananth Mahadevan also appear in supporting roles in the film.

The main character of the movie is chief mining engineer Jaswant Singh Gill, who in 1989 saved 64 miners trapped in a mine at Raniganj Coalfields in eastern India. 71 miners became trapped as the shafts filled with water, despite the fact that many workers were able to leave the mine in two lifts. The plan for rescue was created by Jaswant and his team, and it called for removing the trapped miners one at a time from a steel capsule.

For his efforts, Gill receive the Sarvottam Jeevan Raksha Padak from the president at the time, Ramaswamy Venkataraman.

Who Is Jaswant Singh Gill?

Akshay Kumar will play the unsung hero Jaswant Singh Gill in Capsule Gill. When a coal mine in Raniganj flooded, Gill acted as chief mining engineer and saved the lives of 65 people. 71 miners remained trapped as the shafts filled with water, despite the fact that many workers were able to escape the mine through two lifts. The rescue plan that Jaswant and his team devised involved removing the trapped miners one at a time from a steel capsule. Therefore, the biopic about Jaswant Singh Gill has a title that, in some ways, is appropriate. President Ramaswamy Venkataraman presented Gill with the Sarvottam Jeevan Raksha Padak in recognition of his efforts.

The film Capsule Gill, in which Akshay plays a turban-wearing Sikh, is said to be in production. A red turban makes Akshay appear unrecognizable in the first look. He also has a thick beard and looks like Jaswant Singh Gill in the movie. The look that Akshay wore in Capsule Gill had already been shared on social media, and now the official still from the upcoming film has been released. The second half of 2023 might see the release of Capsule Gill. However, a formal announcement regarding this topic is anticipated.

How Can I Watch Capsule Gill?

So We Can I Watch Capsule Gill On Cinemas.